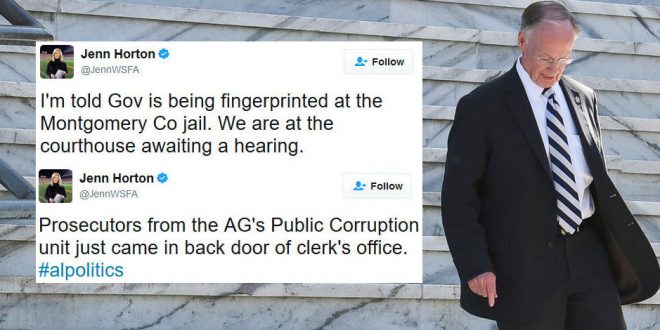 Disgraced GOP “family values” Gov. Robert Bentley was fingerprinted and had his mug shot taken this afternoon after a daylong negotiation with prosecutors over the terms of his resignation, which comes after many months of investigation into his failed and felonious campaign to coverup an adulterous affair with an office staffer.

Last week the state Ethics Commission declared that it has evidence of Bentley having committed four felonies, but so far this afternoon he has only been charged with two misdemeanors, likely as a result of the deal for him to resign.

Tonight Alabama Lt. Gov. Kay Ivey is expected to be sworn as the second female governor in state history, following Lurleen Wallace, who was elected in 1967 after her husband George Wallace was term-limited out of office.

Mugshot is up, expected in court any minute. pic.twitter.com/LWAtnl0C0F Previous OKLAHOMA: Teenage Pages Warned “Cross-Dressers Are In The Building” During Capitol Visit By LGBT Youth
Next ROMNEY BUST: Sen. Orrin Hatch Vows To Bid For Eighth Term Because “Trump Is All Over Me To Run Again”