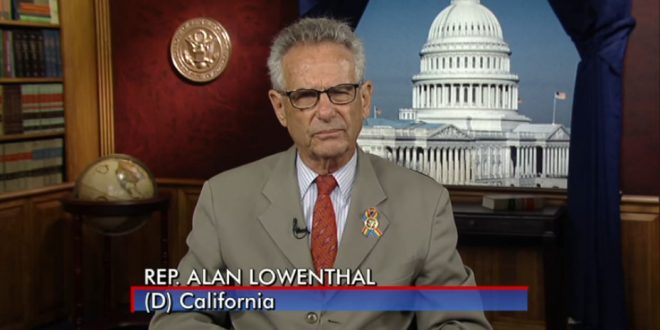 Congressman Alan Lowenthal (CA-47) today called the attack on the Pride flag outside his Capitol Hill office “a shocking demonstration of hate” and yet another example of a wave of intolerance that has spiked across the nation over the past several months. Yesterday, a visitor to the Cannon House Office Building entered the Congressman’s office and angrily exclaimed his belief that the Pride Flag outside the office was inappropriate alongside the American flag.

Members of Congress have permanent fixtures outside each office to accommodate three flags, with two spaces going to the American flag and the member’s state flag. The third slot is used for a personal selection of the Congress member. The flags are arranged so that they follow all laws regarding the display of the American flag.

The man left the Congressman’s office, removed the Congressman’s Pride Flag from its holder, threw it to the ground, and proceeded to repeatedly stomp on it. Other visitors in the hallway verbally reprimanded him and after he left, replaced the flag. They then notified the Congressman’s staff, who caught up to the man, verified he was the one who had stomped on the flag before escorting him into the custody of Capitol Police officers. The Capitol Police are investigating the incident.

“This shocking demonstration of hate is just another example of the shadows of intolerance that have grown longer in recent days,” Congressman Lowenthal said. “Bomb threats called in to Jewish community centers; desecrations of Jewish cemeteries; hate crimes against minorities and the transgender community; and horrifically racist statements from a Member of Congress. To all our brothers and sisters who endure through these hateful acts: we stand with you, and we will continue to fight for your rights and your equality.”

Congressman Lowenthal has been an LGBT community advocate and ally for more than four decades, sponsoring numerous pieces of legislation over the years in support of LGBT rights. Most recently, he led the successful effort to establish within the U.S. State Department a Special Envoy position to advocate for LGBT rights.

He has participated in the Long Beach Pride Parade since its inception, including the very first parade in 1984 where some parade members were forced to wear bulletproof vest due to death threats. Congressman Lowenthal first flew the Pride flag outside his DC office in March, 2013 (and inside his Long Beach district office) to show his solidarity with LGBT Americans, in support of marriage equality, and in opposition to discrimination and violence.

According to the offices of the Architect of the Capitol and the House Historian, it is likely that Congressman Lowenthal is the first Member of Congress to formally display a Pride flag outside his Congressional office. This particular flag has remained outside the Congressman’s DC office since 2013, and visited the steps of the Supreme Court with the Congressman when the ruling on marriage equality was announced.

Previous OKLAHOMA: Even If Convicted Of Child Prostitution, Accused GOP Senator Will Get His Pension [VIDEO]
Next CHRISTIAN LOVE: Tony Perkins Celebrates Trump Budget Plan To Eviscerate Programs For The Poor