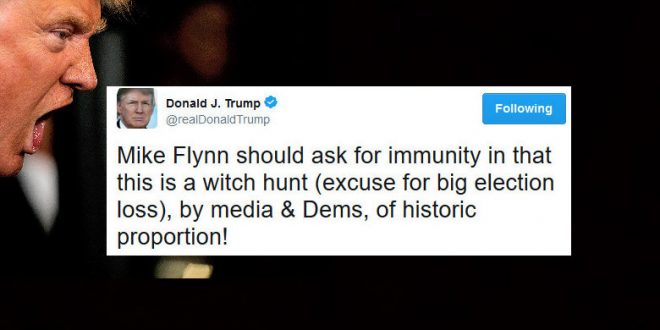 Trump On Michael Flynn: It’s A Witch Hunt By Dems!

President Donald Trump appeared to offer legal advice to his former national security advisor on Friday morning amid reports that Michael Flynn has agreed to be interviewed by the FBI in exchange for immunity.

One old comment of Flynn’s is gaining new prominence in light of the Journal’s report. Speaking about Hillary Clinton’s private email server in September 2016, Flynn said to MSNBC commentator Chuck Todd, “When you are given immunity, that means you have probably committed a crime.”

Mike Flynn should ask for immunity in that this is a witch hunt (excuse for big election loss), by media & Dems, of historic proportion!

Previous BREAKING: Michael Flynn Asks For Immunity From Prosecution In Return For Testimony On Trump/Russia
Next Hannity To Trump: Don’t Blame The Freedom Caucus For The Failure Of “Flawed” Trumpcare Bill [VIDEO]