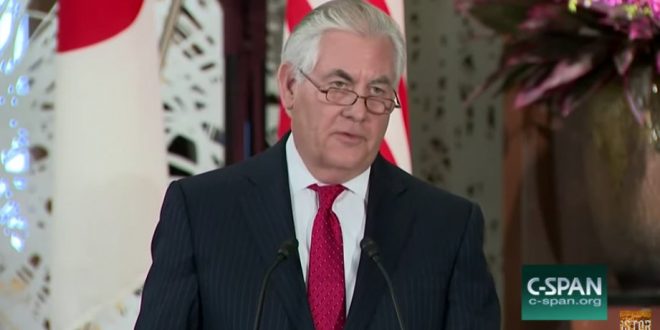 Secretary of State Rex W. Tillerson ruled out on Friday opening any negotiation with North Korea to freeze its nuclear and missile programs and said for the first time that the Trump administration might be forced to take pre-emptive action “if they elevate the threat of their weapons program” to an unacceptable level.

Mr. Tillerson’s comments in Seoul, a day before he travels to Beijing to meet Chinese leaders, explicitly rejected any return to the bargaining table in an effort to buy time by halting North Korea’s accelerating testing program, which the country’s leader, Kim Jong-un, said on New Year’s Day was in the “final stage” of preparation for the first launch of an intercontinental ballistic missile that could reach the United States.

The secretary of state’s comments were the Trump administration’s first public hint at the options being considered, and they made clear that none involved a negotiated settlement or waiting for the North Korean government to collapse.

“The policy of strategic patience has ended,” Mr. Tillerson said, a reference to the term used by the Obama administration to describe a policy of waiting out the North Koreans, while gradually ratcheting up sanctions and covert action.

Earlier in the day, Tillerson visited the demilitarized zone, the highly-fortified border between North and South Korea, becoming the most senior US official to visit the area since President Barack Obama in 2012.

There he met some of the more than 28,000 US troops stationed on the peninsula, and toured the Joint Security Area, where North and South Korea soldiers stand facing each other. A Military Armistice Commission briefing room straddles the border.

The relatively inexperienced Tillerson has waded into a political minefield in South Korea, where President Park Geun-hye was impeached a week ago and preparations are being made for a snap election on May 9.

Soon after Tillerson’s remarks, in a sign of mounting tensions, the North Korean Embassy held an extraordinary news conference in Beijing to blame the potential for nuclear war on the United States while vowing that its homegrown nuclear testing program will continue in self-defense.

North Korea has amassed a huge nuclear stockpile and appears at the brink of being able to strike the U.S. mainland and American allies in Asia. The rising threat from the isolated military dictatorship has prompted the Trump administration to begin assessing its options for how to respond and serves as an early test for how the president will confront an increasingly volatile international situation.

One potential immediate response would be to strengthen existing South Korean missile capabilities or to provide Japan with new offensive missile ability. Japan’s defense chief told parliament this month that he would not rule out “first strike” capability, which would be a major departure from Japan’s postwar pacifist traditions.

The United States could also field the same THAAD missile-defense system in Japan that it is now installing in South Korea or take the potentially provocative stop of reinstalling American nuclear weapons at U.S. bases in South Korea. The North Korean threat could also rekindle the largely dormant idea of a domestic U.S. missile defense system.