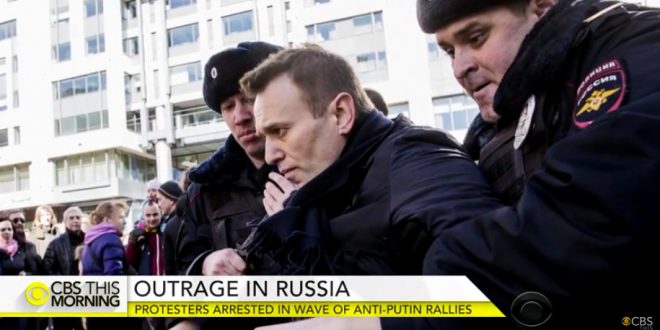 The United States harshly criticized Russia’s detention of opposition leader Alexei Navalny and hundreds of other protesters Sunday in central Moscow. A Reuters reporter saw police detain Navalny, who called the rally to protest corruption, on Moscow’s Tverskaya Street and put him in a police truck. Hundreds of opposition protesters crowded around the police van and tried to prevent it from taking him away. A tweet from Navalny’s account after the incident said: “Guys, I’m all right. Don’t try to break me out. Go on walking down the Tverskaya. Our topic today is fight against corruption.”

The United States said it was monitoring developments and called on Russia to release all of the protesters. Mark Toner, acting spokesman for the U.S. State Department, called the arrests “an affront to core democratic values.” “The Russian people, like people everywhere, deserve a government that supports an open marketplace of ideas, transparent and accountable governance, equal treatment under the law and the ability to exercise their rights without fear of retribution,” Toner said.