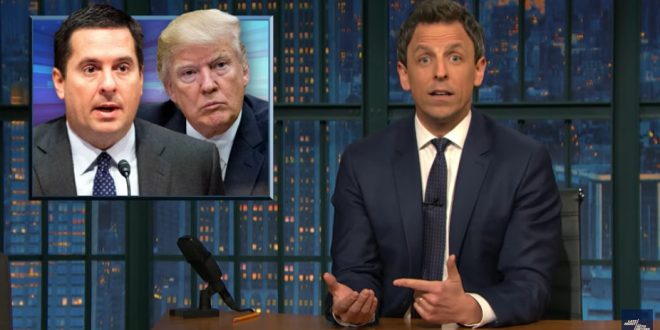 House Intelligence Committee Chairman Devin Nunes (R-Calif.) “has basically done everything he can to delay or interfere with his own investigation, raising the question of whether he’s investigating Trump or working for Trump.” Rep. Ted Yoho (R-Fla.) answered that earlier Thursday, telling MSNBC that Nunes “works for the president, answers to the president.” Meyers suggested that Yoho and probably Nunes need a remedial civics lesson. “Congress does not work for the president,” he said. “If Congress always did what the president told them to do, [former President Barack Obama] would not have left office looking like this,” illustrating his point with a photo of a very tired, gray Obama.

But amazingly, the Nunes story got even “weirder” on Thursday, when The New York Times traced Nunes’ sources for possible incidental, legal eavesdropping on Trump’s team back to the White House. “That means Nunes went to the White House to brief Trump on information he got from the White House,” Meyers said. “It’s like when you send yourself an email reminder and two minutes later go, ‘Oh, a new email.'” White House Press Secretary Sean Spicer dished up a flavorless word salad when asked about the report. “I’ll bet Sean Spicer fantasizes about having an easier job,” Meyers said, “like Bill Cosby’s publicist.”