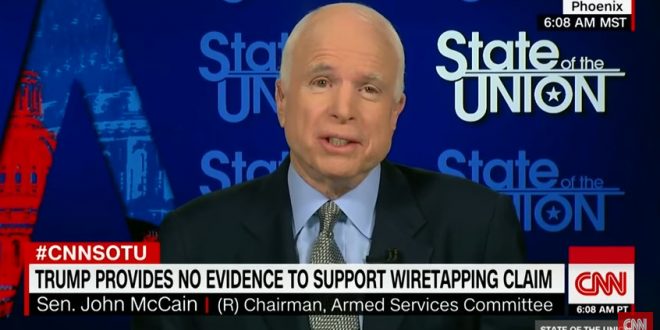 Sen. John McCain: Trump Must Retract His Wiretapping Claim Or Provide Evidence Of His Accusation [VIDEO]

Sen. John McCain (R-Ariz.) on Sunday said President Trump either has to retract his claim that former President Barack Obama wiretapped Trump Tower, or provide evidence of the allegations. “President Trump has to provide the American people, not just the intelligence community, but the American people, with evidence that his predecessor, former president of the Unites States was guilty of breaking the law,” McCain told CNN’s “State of the Union.”

The House Intelligence Committee has asked the White House to provide any evidence of the allegations by Monday. McCain said on Sunday that if Obama “violated the law” by ordering a wiretap, then “we’ve got a serious issue.”