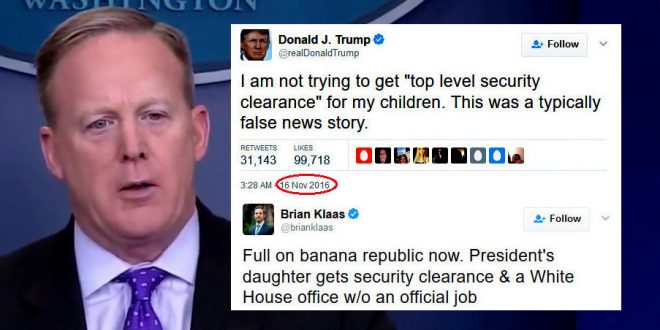 Ivanka Trump’s new office in the White House was cleared by White House lawyers and the federal government’s ethics watchdog, press secretary Sean Spicer said Tuesday. News came out Monday that the president’s daughter would be getting an office and a security clearance at the White House, even though she has not taken a formal job in the administration. Spicer said she worked with White House attorneys on making sure she’s following the rules.

When asked if White House counsel has cleared Ivanka Trump’s office and security clearance, Spicer said they’re working with administration officials to develop the office. “Ivanka has taken on several actions to promote high standards of ethical conduct,” Spicer said. “Even though she’s not a federal employee she’ll follow the restrictions as if she were. She’s taken these steps with the advice of counsel and in consultation with the Office of Government Ethics.”

Spicer on Ivanka Trump getting an office in the White House: She’s “taken on several measures to promote high standards of ethical conduct.” pic.twitter.com/oqYNqw82Dr