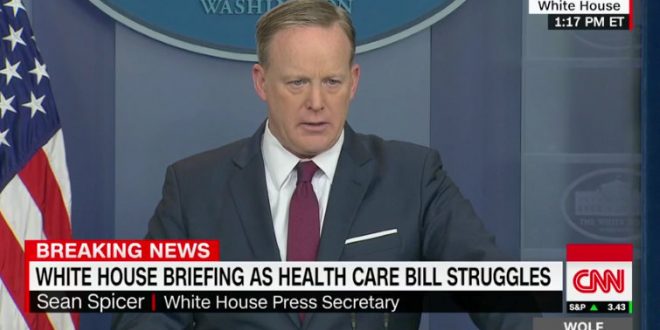 Sean Spicer: The House Vote On Trumpcare Will Happen At 3:30PM Whether Votes Are There Or Not [VIDEO]

The White House said Friday the House will vote on the Republican healthcare plan despite serious doubts it has the votes to pass.
“The House will be voting on the American Health Care Act, the current vote is scheduled for 3:30,” White House press secretary Sean Spicer told reporters.

He spoke as President Trump met with Speaker Paul Ryan (R-Wis.), who have both struggled to break conservative and moderate opposition to the bill. Spicer said Trump and Ryan were talking “to see where that vote count stands.” The spokesman touted Trump’s efforts to sell the bill, saying “he’s left everything on the field when it comes to this bill.”

Spicer says vote on Trumpcare/AHCA will happen at 3:30 pm, despite concerns that GOP doesn't have votes to pass it https://t.co/dsGcrTjuTg