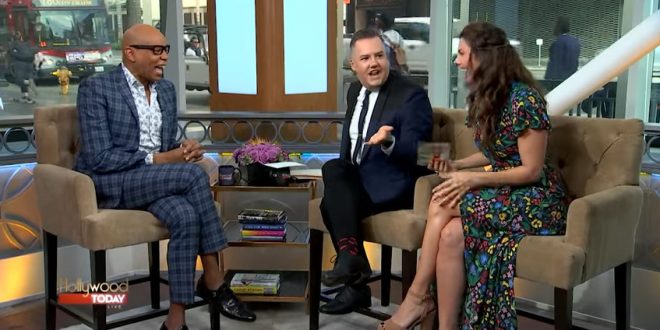 On Fox’s Hollywood Today this afternoon, RuPaul made a big announcement in a decidedly understated way. While hosts Ross Mathews and Ali Landry asked about his nearly-quarter-century relationship with boyfriend Georges LeBar, he gamely gave answers about spending time on the other man’s massive ranch in Wyoming.

As one would assume, he said he wears Western-themed outfits on the ranch (“and no one cares!”) but that in general, Wyoming is very boring. Then, however, he corrected the record a little bit. LeBar is no longer the drag icon’s boyfriend. No, instead, he’s his husband! “You know what? I don’t think I’ve said this on — I’ve never said this on television before,” he blurted out. “We are married.”

Previous Grifter Jim Bakker: The Women’s March Fulfills Prophecy That The End Times Are Totes Upon Us [VIDEO]
Next Roger Stone: Anti-Trump Deep State Saboteurs Just Tried To Assassinate Me With A Car Crash [VIDEO]