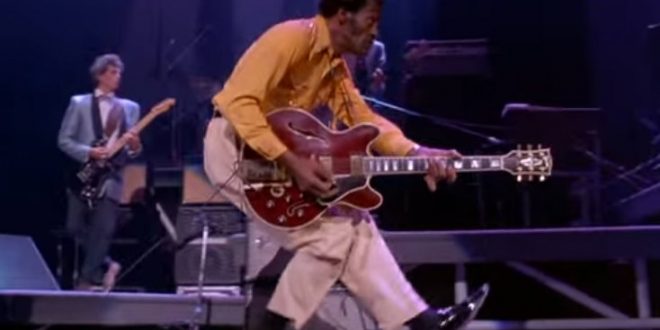 Chuck Berry, the singer, songwriter and guitar great who practically defined rock music with his impeccably twangy hits “Maybellene,” “Roll Over Beethoven,” “Memphis,” “My Ding-a-Ling” and “Sweet Little Sixteen,” has died. He was 90.

The singer/songwriter, whose classic “Johnny B. Goode” was chosen by Carl Sagan to be included on the golden record of Earth Sounds and Music launched with Voyager in 1977, died Saturday afternoon, St. Charles County Police Department confirmed. The cause of death was not revealed.

During his 60-plus years in show business, Berry in 1986 became one of the first inductees into the Rock and Roll Hall of Fame. He entered The Blues Foundation’s Blues Hall of Fame in ’85 and that year also received a Grammy Lifetime Achievement Award.

He performed in 1979 for President Jimmy Carter at the White House, landed at No. 6 on Rolling Stone’s list of the “100 Greatest Guitarists of All Time” and trademarked his stage showmanship with his famous “duck walk.”

John Lennon once said, “If you tried to give rock and roll another name, you might call it ‘Chuck Berry.’” He paved the way for such music legends as the Rolling Stones, the Beatles, the Beach Boys, the Band, Jimi Hendrix, David Bowie, Eric Clapton, AC/DC, Sex Pistols and Jerry Lee Lewis, among many others.