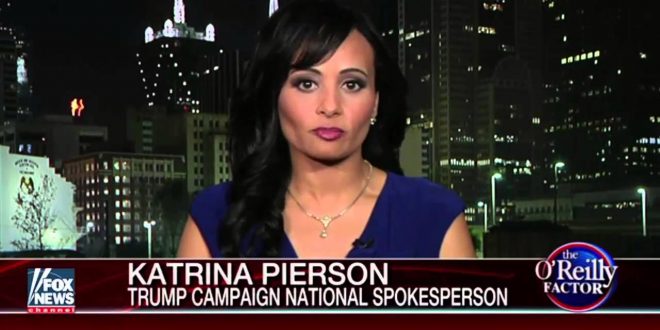 REPORT: Katrina Pierson Didn’t Get White House Gig Because She Was “Bitching” About Sean Spicer

The Washingtonian did some digging into why former Trump campaign spox and compulsive liar Katrina Pierson did not land a White House position and instead now works for a pro-Trump outfit. They report:

So what happened? Pierson says she was offered the role of deputy press secretary. She accepted it, she says. But then she backed out. “It was funny because, I think it might have been a week later…I called ‘em up and said, ‘You know, I’ve been thinking about it, and I think I’m gonna go over to the c4.’” (America First is organized under section 501 (c)(4) of the IRS Code, which allows a nonprofit to engage in some political activities.) Pierson insists that it was her decision alone. “I talked to…staff, who were very disappointed,” she says. “But they understood. Everybody said, ‘Do what you feel is in your heart.’”

The White House did not return emails asking to confirm this chain of events. But a senior campaign official who’s close with Pierson says that Pierson lost the deputy press secretary post “on her own accord.” The source says that Pierson was “pissed” that she wasn’t tapped instead for press secretary: “I love Katrina, but she was bitching to everyone that they should have chosen her and not Sean [Spicer],” the source says. “It got back to Jared [Kushner] and Reince. And they ultimately decided they just didn’t want to deal with that sort of drama. So they ‘placed’ her in the c4.” The position was ultimately given to former campaign aide Sarah Sanders.

Previous Ex-Gay Torture Advocates Express Hope For Help From Trump/Pence Ahead Of ABC News Exposé [VIDEO]
Next PHILADELPHIA: Diner That Was Site Of Historic 1965 LGBT Rights Protest To Close On Memorial Day