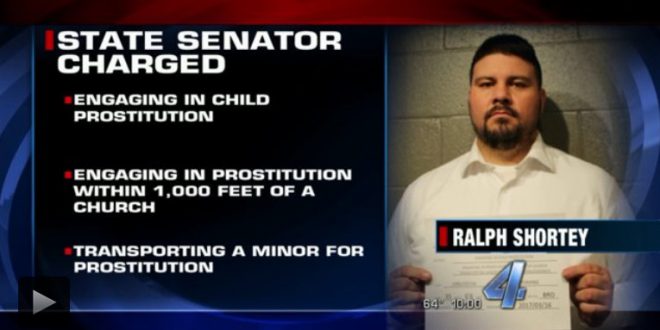 OKLAHOMA: Even If Convicted Of Child Prostitution, Accused GOP Senator Will Get His Pension [VIDEO]

Oklahoma Gov. Mary Fallin and leaders of both state parties last night called for the resignation of Sen. Ralph Shortey. If his resignation doesn’t come immediately, the Senate will likely act to expel him early next week. Meanwhile there’s this:

Shortey, 35, has been in office long enough that he will get his state retirement. There is a law that strips elected officials of their pension if convicted of a felony like bribery, corruption, or perjury, but it does not include prostitution with a minor.

“Bribery means an automatic revocation of your retirement benefits, doing these things with minor children does not? I think that ought to change,” House Minority Leader Scott Inman said. Even if convicted, Shortey will receive over $9,000 a year from the state when he retires.

If that’s 25 years of retirement, for example, the State of Oklahoma will pay him nearly $230,000. Leader Inman told NewsChannel 4 he plans to file legislation next year to expand the law to include other felonies. NewsChannel 4’s continued calls to Shortey continued to go unanswered. He is still able to vote on the Senate floor and collect a paycheck.

Yesterday police released transcripts of Shortey’s email exchange with the teen. After telling him to bring a pipe, allegedly so they could smoke marijuana, Shortey promised the teen that he would “fuck you like a good little boy if you keep calling me daddy.” Oklahoma’s age of consent is 16 but child prostitution laws apply to anyone under 18.

During his Senate career Shorty authored and supported numerous right wing bills. Most notable, perhaps, was his anti-immigrant bill which he claimed would help stem the “epidemic” of child sex trafficking.