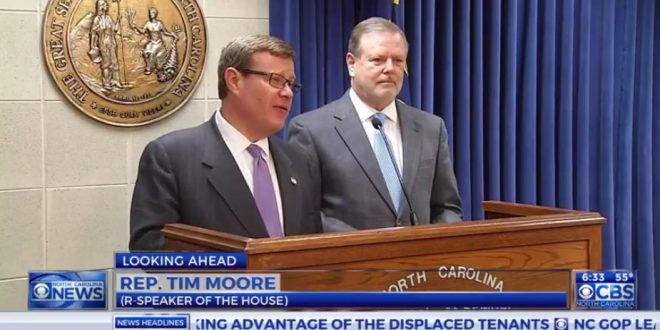 North Carolina lawmakers could repeal House Bill 2 on Thursday under a deal struck late Wednesday night by Democratic Gov. Roy Cooper and Republican legislative leaders. Senate leader Phil Berger announced the deal shortly after 10:30 p.m. The announcement capped days of marathon, often contentious negotiations and closed-door meetings. Berger and House Speaker Tim Moore took no questions. Details of the deal had not been released by 11 p.m. but were provided in a .PDF document soon after.

“I support the House Bill 2 repeal compromise that will be introduced tomorrow,” Cooper said in a statement. “It’s not a perfect deal, but it repeals House Bill 2 and begins to repair our reputation.” According to a statement from Berger and Moore, the bill would:

▪ Leave bathroom regulation to the state, essentially returning to the status quo before Charlotte passed a 2016 ordinance allowing transgender people to use the restroom of their gender identity.

For over a year, HB2, widely seen as anti-LGBT, put North Carolina in the national spotlight and prompted boycotts and economic losses. The NBA moved its All-Star Game from Charlotte. The ACC and the NCAA moved championship games. But the compromise to repeal it drew fire from LGBT groups even before it was announced.

“The deal proposed would continue to actively discriminate against the LGBT community,” Chris Sgro, executive director of Equality NC, said in a conference call.

Activists and hate groups are loudly opposing the deal:

Advocates for the gay community are calling the compromise “a sell out,” while conservatives are equally critical of any move that would negate what they see as a “common sense privacy law.” The latter refers to a highly-debated belief that giving transgender people rights to use the restroom of their choice would allow male sexual predators into women’s restrooms.

NC Values Coalition, which has been a major backer of House Bill 2, is urging state officials to “stand strong” on the widely criticized law. On Thursday, the group was promising to “target” any state official who voted for the compromise “as we did with Governor Pat McCrory.” McCrory lost his bid for re-election last last year, in part due to the HB2 controversy.

“This repeal of HB2 will not solve anything!” said a statement from the coalition. “It will never be good public policy to allow men into women’s and little girl’s bathrooms and showers. HB2 guarantees that won’t happen, and it provides reasonable accommodation for a small minority of transgender people.”

The Human Rights Campaign (HRC) and Equality North Carolina urged North Carolina lawmakers to reject a backroom “deal” that would both continue the harms of the discriminatory HB2 law and push the possibility of full repeal further out of reach.

This means that North Carolina would continue to be the only state in the nation to have shamefully funneled anti-transgender animus into a law regulating restroom access. The proposal would also prevent cities in North Carolina from establishing non-discrimination protections for LGBTQ people for at least three years, undermining efforts by cities like Charlotte to attract top talent, major businesses, and other economic opportunities.

For more than a year, Senate President Phil Berger and House Speaker Tim Moore have blocked an up-or-down vote on clean repeal of HB2, despite the overwhelming outcry from voters, businesses, and others seeking to do business in the state.

“The rumored HB2 ‘deal’ does nothing more than double-down on discrimination and would ensure North Carolina remains the worst state in the nation for LGBTQ people,” said HRC President Chad Griffin. “The consequences of this hateful law will only continue without full repeal of HB2. Sellouts cave under pressure. Leaders fight for what’s right.”

“This proposal is a train wreck that would double down on anti-LGBTQ discrimination. North Carolinians want a clean repeal of HB2, and we urge our allies not to sell us out,” said Chris Sgro, Equality NC Executive Director. “Those who stand for equality and with LGBTQ people are standing strong against these antics. We’ve got less than 24 hours before the NCAA deadline. There is no time to waste – our leaders must fight for what’s right, and that is full repeal.”

REMINDER: #HB2 proposal is a bad deal that does not actually #RepealHB2. Instead it doubles-down on discrimination. Join us in speaking out!