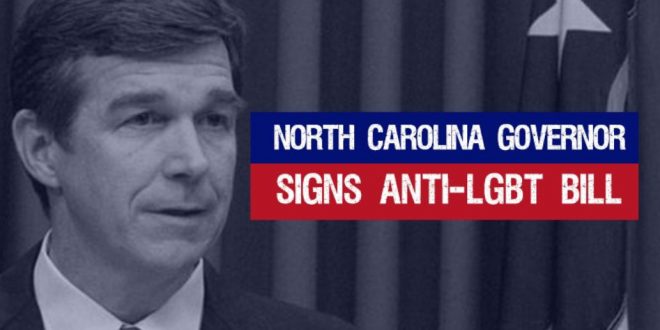 The General Assembly on Thursday approved a compromise bill that repeals House Bill 2 but restricts anti-discrimination ordinances in cities and counties. Gov. Roy Cooper signed the measure into law. The Democratic governor negotiated the compromise with the Republican leaders of the legislature, House Speaker Tim Moore and Senate leader Phil Berger.

“It was a very measured approach,” Moore told reporters. “I think this bill, as written, is also something that is very defensible in court. I think it’s something the public supports. No one is 100 percent happy, but I would say I’m 95 percent happy.”

Opposition and support did not fall along party lines in either the House or the Senate, as advocacy groups on the left and right criticized the measure. Some of the most liberal Democrats and conservative Republicans voted against it. The Senate voted 32-16 in support. In the House, the bill passed 70-48.

“Today, we repealed HB2. It wasn’t a perfect deal or my preferred solution, but an important first step for our state.” – Governor Cooper

“We call on the NCAA to oppose this shameful HB2.0 bill in North Carolina, and not to reward lawmakers who have passed this so-called ‘deal’ which is an affront to the values we all hold. This bill is anti-worker, anti-access to the courts, and anti-LGBTQ. It violates all basic principles of diversity, inclusion and basic civil rights. Fundamentally, any moratorium on civil rights is not a compromise, it is a contradiction with the principle of equal protection under the law and our moral values.”