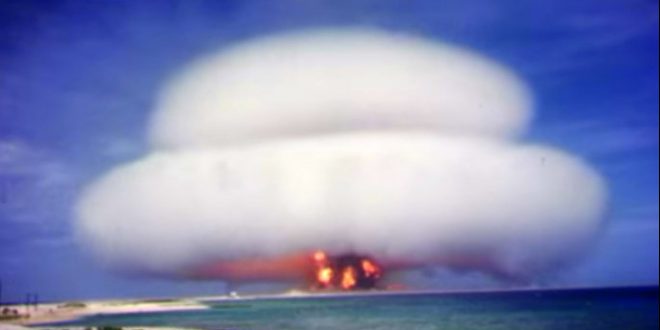 For your nightmares. Extreme Tech reports:

As the Cold War ramped up, the US detonated hundreds of nuclear weapons in the South Pacific and American Southwest as it built ever more powerful bombs. Every single test was filmed, often from many different angles. The government contracted AT&T to film the tests and analyze the images. However, the accuracy of measurements in those days wasn’t as good as it is now. Additionally, the condition of the original film was degrading fast. Old film was mostly made from a nitrocellulose base, which is an organic material that is flammable and breaks down over time. It didn’t help that the nearly 7,000 film reels were not stored properly.

According to LLNL’s Greg Spriggs, if the recovery process wasn’t underway now, it would never be possible. The team has been at it for five years now, having scanned about 4,200 of the films recovered from classified archives. Only 750 of them have been declassified so far, but the military is slogging through, giving LLNL the okay to release more records. Atmospheric nuclear tests were banned in 1963, so the only data we have on how these weapons behave comes from these old tests. The 64 videos posted to YouTube are just a taste of what LLNL has in store. They include tests from different periods between 1945 and 1962, but some depict the same detonation from different angles. Several videos were shot in high-speed so extreme you can watch the fireball expand during the first fraction of a second after detonation.

The airburst clips are the most terrifying for some reason.