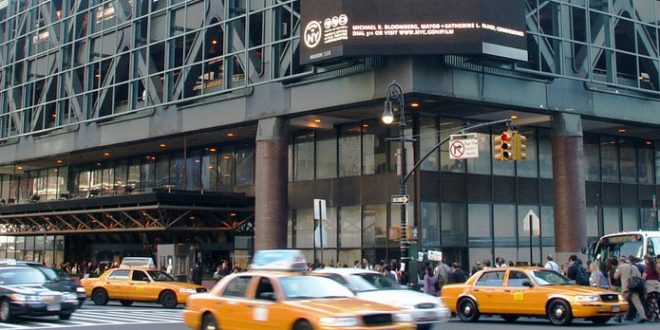 Port Authority cops have become bathroom police, according to a lawsuit filed Monday that accuses the department of targeting gay men for bogus lewdness charges. Plainclothes officers pretend to use the Port Authority Bus Terminal urinals while staring at suspects over the small privacy dividers, said the suit filed in Manhattan Federal Court.

The cops then “falsely (claim) that they were engaged in illegal conduct,” the suit said. The officers targeted men using Port Authority Bus Terminal restrooms “on the discriminatory basis of actual or perceived sexual orientation, actual or perceived gender expression, and/or to boost ‘quality of life’ arrest statistics…,” said the suit.

The officers carrying out these questionable collars will stare at their targets while they’re using the urinal. “In some cases, the officer will actually step back from the urinal in order to see around the privacy wall, in an effort to view the target’s hands and genitals,” said the suit, filed by the Legal Aid Society and Winston & Strawn.

Cops spy on men who seems “gay or non-gender conforming” through the slats in the privacy dividers in the man’s bathroom and then lie and say that the men are touching themselves, according to the suit and plaintiff attorney Ross Kramer.

“It’s an absolutely unacceptable use of police power,” said Kramer. “They go into public restrooms and have plainclothed officer stare at people and then accuse men who they believe to be gay of engaging in lewd behavior. It pads their arrests stats by preying on a vulnerable group of people.”

One man who was arrested says he even heard other officers congratulate the cop who busted him, calling him “the gay whisperer” because of the large amount of seemingly homosexual men he cuffed.  The Port Authority cops look for men who seem gay or effeminate based on the way they carried themselves or clothing or jewelry believed to be “non-masculine,” the suit says.