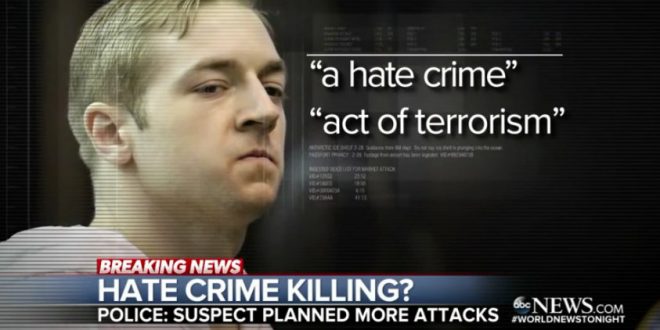 The Baltimore man who selected a black man at random and stabbed him to death in Midtown has been charged with murder as an act of terrorism. James Harris Jackson, 28, faces life without parole if convicted of the charges filed by the Manhattan District Attorney’s office Monday.

Jackson allegedly stabbed bottle-collector Timothy Caughman, 66, Monday at 36th St. and Ninth Ave. at 11:30 p.m. He’d taken a bus to New York from Baltimore on March 17 specifically to kill black people in a place where he thought the act would get greater media attention, officials said.

In an exclusive interview with the Daily News, Jackson acknowledged the crime, and said he wanted to discourage white women from getting romantically involved with black men. “I didn’t know he was elderly,” told The News, adding he rather would have killed “a young thug” or “a successful older black man with blonds… people you see in Midtown. These younger guys that put white girls on the wrong path.”

Jackson, an Afghanistan war veteran, was also charged with murder as a hate crime. Earlier today Jeff Sessions refused to answer a question about the murder.

Reporter yells q about white supremacist who killed a black man in NYC. “Is that a hate crime, sir.” Sessions keeps walking. No answer.