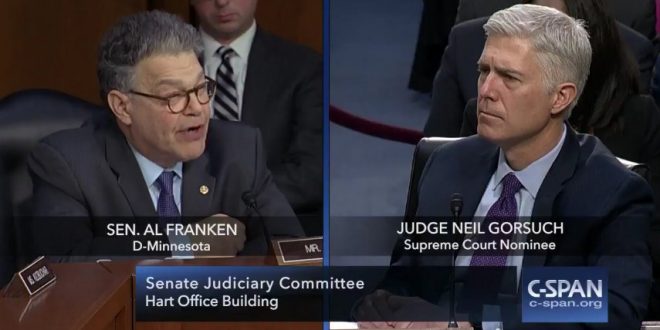 Gorsuch On Marriage: Obergefell Is “Absolutely Settled Law” But Questions Remain About Its Scope [VIDEO]

The discussion of same-sex marriage was particularly pointed. When asked how his views on marriage have changed over the years, Gorsuch said he would not answer because it “would send a misleading signal to the American people.” Gorsuch was asked about same-sex marriage, which was upheld by the Supreme Court in 2015, and called it “absolutely settled law.” But Gorsuch said he would not speak more on it because there are other legal actions still unfolding that are related to the impact of that ruling. “There’s ongoing litigation about its impact and its application right now,” Gorsuch said. Gorsuch said.

The “scope” of Obergefell is that same-sex marriage is legal. Is Gorsuch saying that under certain conditions it’s not, and what conditions?

Gorsuch:”Obergefell is settled, but there is ongoing litigation about its scope” His answer is frightening & telling https://t.co/uV4SlA8paN

No success from Franken on getting Gorsuch’s personal views on marriage equality, but he says Obergefell is “absolutely settled law.”