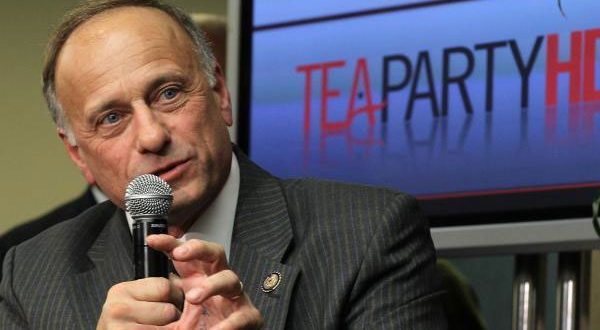 Nazi Site Celebrates “Our Guy” GOP Rep. Steve King: He Is Basically An Open White Nationalist At This Point

From the Daily Stormer:

Steve King is basically an open white nationalist at this point. Today, with a Geert Wilders meme, he tweeted: “Wilders understands that culture and demographics are our destiny. We can’t restore our civilization with somebody else’s babies.”

OUR civilization and SOMEBODY ELSE’S babies. Not really any nuance there. He is saying the country is white, it is our country and we shouldn’t be raising other people’s kids. King famously declared the supremacy of the white race at the RNC in an MSNBC interview. It was awesome.

When asked to apologize, he doubled down. Steve King should be Speaker of the House. Period. There is as plain as the nose on your face. He is /ourguy/.

Previous Congressional Budget Office Predicts As Many As 24 Million Could Lose Coverage Under Trumpcare
Next Melania To Skip Hosting Irish Prime Minister On St. Patrick’s Day Because She Won’t Leave Trump Tower