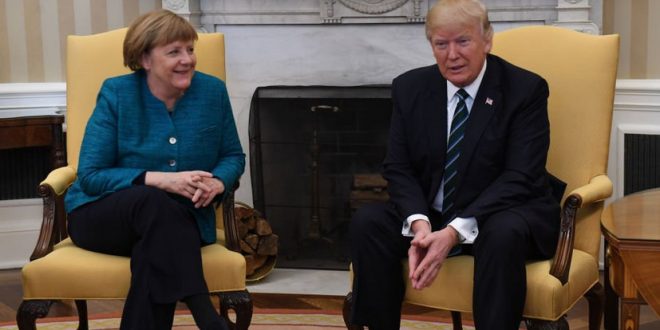 How do you say “awkward” in German? President Donald Trump is set to appear at a joint news conference today with German Chancellor Angela Merkel after he spent months during the 2016 election campaign bad-mouthing her approach to the refugee crisis in Europe. Trump’s tough comments during the campaign about Merkel and what he called the “disaster” that Germany had become stood out because he had previously praised her in 2015 as “probably the greatest leader in the world today.”

The following year, in a campaign speech in Ohio in August, Trump compared his then-rival Hillary Clinton to Merkel and not in the kindest way. “Hillary Clinton wants to be America’s Angela Merkel, and you know what a disaster this massive immigration has been to Germany and the people of Germany. Crime has risen to levels that no one thought would they would ever see,” Trump said. “We have enough problems in our country, we don’t need another one,” the candidate said.

Photographers: Can we get a handshake?
Merkel (to Trump): Do you want to have a handshake?
Trump: *no response*
Merkel: *makes awkward face* pic.twitter.com/ehgpCnWPg7