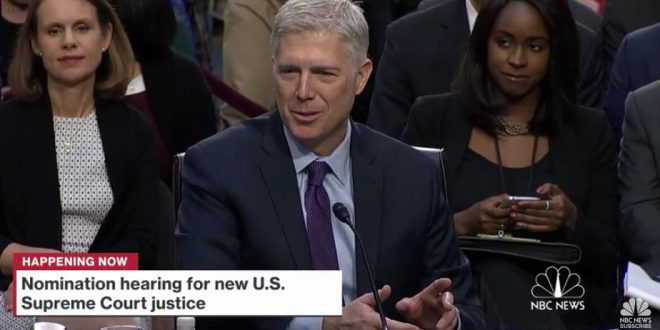 The second day of confirmation hearings for President Donald Trump’s Supreme Court nominee Neil Gorsuch are set to take place Tuesday. Gorsuch delivered his opening statement on Monday amid Republican praise and some opposition from Democrats, who remain bitter that former President Obama’s pick for the Supreme Court, Merrick Garland, was not even considered by Senate Republicans last year. On Tuesday, Gorsuch will begin to face questioning from the Senate Judiciary Committee. Each senator will receive 30 minutes to question Gorsuch in a session that’s expected to last up to 10 hours. If Gorsuch is confirmed, he will replace the late Antonin Scalia and give the conservative wing a 5-4 majority in the court.

Previous J.J. Abrams To Produce Series Based On RuPaul’s Life
Next The Kellyanne Conway Playbook [VIDEO]