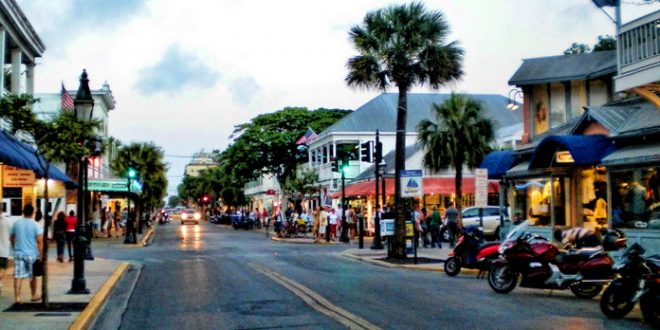 A man accused of a homophobic hate crime in downtown Key West was arrested Wednesday morning in North Carolina and will be extradited to Monroe County for prosecution, authorities say. The Key West Police Department said Brandon Ray Davis, 30, was taken into custody by the Onslow County (N.C.) Sheriff’s Office on an “extraditable warrant” for felony aggravated battery stemming from the Feb. 23 incident.

Davis lives in Richlands, N.C. He is accused of using a deadly weapon — his scooter — to nearly run down two men on bicycles while deluging them with homophobic comments. Since it’s classified as a hate crime, if Davis is convicted, he could face enhanced penalties.

Kevin Seymour and Kevin Price told police that about 1 a.m. on Feb. 23, they were riding bicycles in the 700 block of Duval when they saw a man swerving on a rented scooter. Seymour says he shouted to warn the scooter rider, identified by police as Davis, that he almost hit a car. Davis yelled, “You guys are a couple of fags,” “I bet you faggots voted for that bitch Hillary” and “You live in Trump country now,” police say. When Seymour threatened to call police, Davis allegedly told him, “If you do that, I’ll cut you up.”

Davis allegedly knocked one of the men off his bike with his scooter. He was identified by the victims and a witness after police tracked him down via the drivers license used to rent the scooter.

NOTE: News of the attack surfaced several days ago but I typically don’t report on hate crime allegations until an arrest is made. You know why.

Previous Al Franken: Sessions Should Hold A Press Conference And Then We’ll Decide If He Should Resign [VIDEO]
Next Senior House Republicans: AG Jeff Sessions Must Recuse Himself From Russian Hacking Probe [VIDEO]