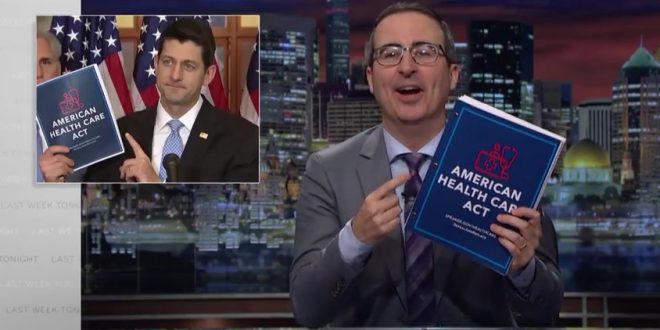 The American Health Care Act (ACHA) is here and according to John Oliver it’s “the legislative equivalent of Pirates of the Caribbean 5.”

“You may not have wanted it, it looks awful, but it’s here anyway,” Oliver said on Last Week Tonight while focusing his attention on the health care bill that the GOP unveiled this week to replace so-called Obamacare. According to Oliver, the early reviews for the ACHA have been rough, with many pundits calling it “dead on arrival.”

However, because there is a chance the bill will become law, Oliver wanted to ensure that people understood the impact of the bill, which as Oliver put it, cuts “ the living s–t out of Medicaid.” That provision alone could mean millions of Americans losing coverage.

Oliver also pointed out that the bill’s extensive tax cuts, which largely benefit the wealthiest citizens, are essentially “taking from the poor and giving to the rich,” according to Oliver, who dubbed it “a Reverse Bernie Sanders.”