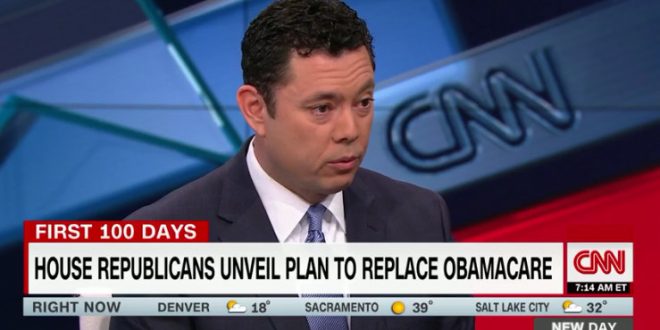 Jason Chaffetz: People Should Just Skip The Next iPhone To Pay For The GOP’s Healthcare Plan [VIDEO]

This morning GOP Rep. Jason Chaffetz conceded that the GOP’s “Trumpcare” will result will result in less coverage for Americans. Mediaite reports:

“Americans have choices and they’ve got to make a choice and so maybe rather than getting that new iPhone that they just love and they want to go spend hundreds of dollars on that, maybe they should invest it in their own healthcare. They’ve got to make those decisions themselves,” Chaffetz said.

“So in other words, for lower income Americans, you’re saying this is going to require some sacrifice on their part?” asked show co-anchor Alisyn Camerota. “We’ve got to be able to lower the cost of healthcare,” said Chaffetz, pivoting. When pressed again by Camerota, Chaffetz finally admitted that the Republican plan would likely result in less coverage. “Yes, I think that’s fair.”

GOP Rep. Chaffetz: Americans may need to choose between “new iphone… they just love” and investing in health care https://t.co/5Hxwn2uOl5