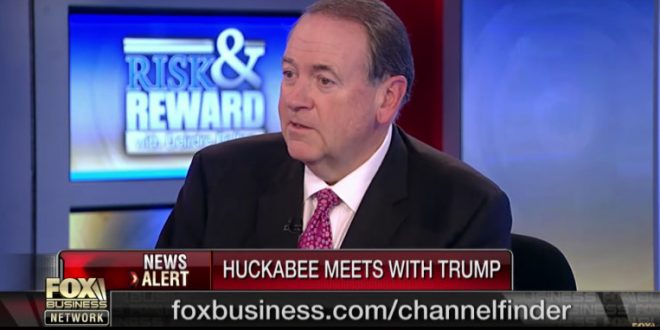 Huckabee Begs Trump Not To Gut The Arts

In an op-ed for the Washington Post, Mike Huckabee manages to simultaneously defend the arts and heap insults on artists. He writes:

Donald Trump wasn’t my first choice for president. I was. But he was my second choice, and I’m proud that I supported him. In tackling the federal budget, he faces a debt that has doubled to $20 trillion in the past eight years. No doubt a chainsaw seems more appropriate to the task at hand than a carving knife, but I would urge my president and friend to hold back from one tiny area of the budget whose elimination would cost far more than it would save.

Funding for the National Endowment for the Arts might seem expendable — especially given how often celebrity artists insult and even threaten the president. But such hateful high-dollar Hollywood and music-industry stars don’t receive anything from the NEA, and they shouldn’t. Not because of their insufferable political whining, but because they get rich selling their talents to the highest bidder in the private sector. I have zero interest in spending a dime of tax money to prop up those who hate the president and the tens of millions who elected him.

I do care greatly about the real recipients of endowment funds: the kids in poverty for whom NEA programs may be their only chance to learn to play an instrument, test-drive their God-given creativity and develop a passion for those things that civilize and humanize us all. They’re the reason we should stop and recognize that this line item accounting for just 0.004 percent of the federal budget is not what’s breaking the bank.