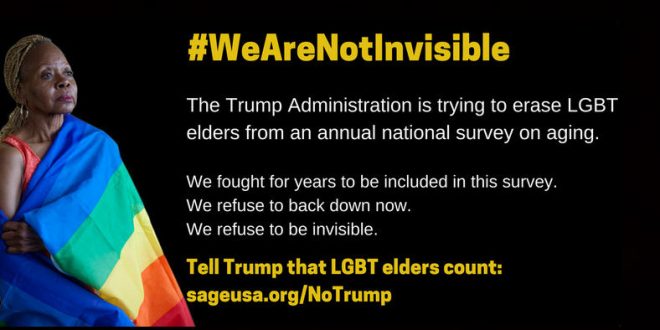 Advocates are outraged that questions about LGBTQ seniors have suddenly been removed from an annual survey that determines services for elderly Americans. The Department of Health and Human Services (HHS) uses the National Survey of Older Americans Act Participants (NSOAAP) to decide how to allocate federal funding to groups that work with the elderly.

For years, LGBTQ groups lobbied to have the survey include questions that would help identify the amount of lesbian, gay, bisexual and transgender elderly people who live in the U.S. and participate in services.

In 2014, questions about sexual orientation and gender identity were added to the survey — helping researchers determine the U.S. is home to about 3 million LGBTQ people over the age of 55. The Trump administration released a draft of the 2017 survey, with only one noticeable change from previous years: The LGBTQ questions are gone.

Services & Advocacy for LGBT Elders (SAGE) announced today that it is launching a nationwide effort to oppose the Trump Administration’s proposed erasure of LGBT elders from the National Survey of Older Americans Act Participants (NSOAAP). Specifically, SAGE opposes changes that would eliminate questions that allow the federal government to assess the extent to which LGBT older adults are receiving federally funded elder services. According to a March 13 notice in the Federal Register, those questions (which have been included in the Survey since 2014) are proposed for elimination in the 2017 Survey. This is the only change the Trump Administration proposes to the Survey.

This annual survey is conducted by the federal government to evaluate the effectiveness of programs funded under Title III of the Older Americans Act, including who is being served by such programs. Results from the survey are used to determine how to direct billions of dollars toward older people’s needs through publicly funded senior centers, home-delivered meals, family caregiver support, transportation, and other key supports.

Community advocates have made inclusion of LGBT people in government surveys a top priority as a way of ensuring that they are counted and that those in need receive their fair share of taxpayer-funded services. This is especially true for the more than 3 million LGBT older Americans, who often confront severe challenges, including intense social isolation. LGBT elders are twice as likely to live alone, twice as likely to be single, and 3-4 times less likely to have children to help care for them in their later years; many are estranged from their families of origin as a result of historical bias. LGBT elders, who suffer from the accumulated results of a lifetime of discrimination, are more likely to live in poverty than older Americans in general, and more likely to struggle with serious health conditions.

Trump Admin seeks to ERASE #LGBT elders from national aging survey. SAGE says “NO!” We hope you do to. Learn more: https://t.co/LyzEL1DPBL pic.twitter.com/Zd9l2qsnmX