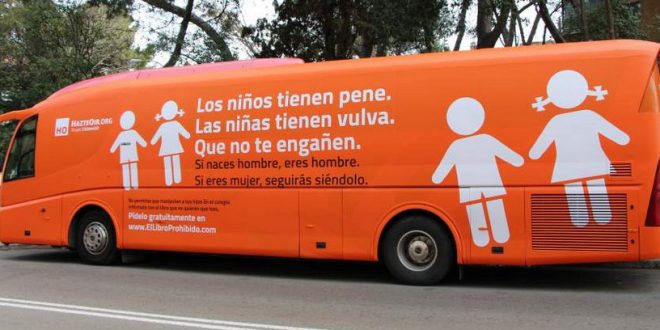 A tour bus affirming biological sex and criticizing transgender ideology, known as the #FreeSpeechBus, will launch this week during the United Nations’ sixty-first session of the Commission on the Status of Women. The #FreeSpeechBus’s North American tour will begin with a press conference on Thursday, March 23 at 12:00pm Noon ET, outside the United Nations building on the steps of the Dag Hammarskjold Plaza.

The sponsors of the bus—including Ignacio Arsuaga, President of CitizenGO, and Brian Brown, President of the International Organization for the Family—will speak at the press conference. They will address the dangers posed by the promotion of “sexual orientation and gender identity” in education, legislation, and international instruments. An identical #FreeSpeechBus has been touring Spain over the past two weeks and has generated heated controversy for its message that “boys are boys and always will be,” and “girls are girls and always will be.”

Spanish municipalities have censored and immobilized the European bus, and the hacker group Anonymous even launched an attack against CitizenGO’s website in retaliation. Chelsea Clinton criticized the bus in a tweet, warning not to bring such as bus to the United States.

“The Spanish #FreeSpeechBus has become an international phenomenon because proponents of gender ideology refuse to allow dissenting voices to be heard,” said Ignacio Arsuaga, President of CitizenGO. “We are excited to launch this bold message of common sense in the United States on the occasion of the U.N. Commission on the Status of Women. We intend to firmly advocate for our ideals while respecting the dignity all individuals,” he added.

CitizenGO is a community of active citizens who work together, using online petitions and action alerts as a resource, to defend and promote life, family, and liberty. The #FreeSpeechBus will make stops in New York, New Haven, Boston, Philadelphia, and Washington D.C. over the next two weeks.

Contrary to the claim above (and as you’ll see in the clip below), the hate bus was actually banned in Spain for violating municipal rules on outdoor advertising. Last week the State Department appointed C-FAM, a member of Brown’s recently formed hate group coalition, to the official US delegation to the UN conference.