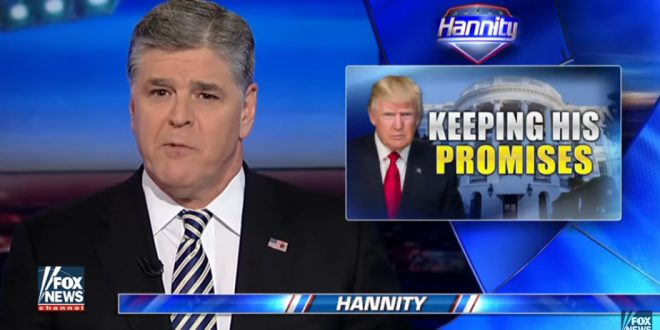 Hannity To Trump: Don’t Blame The Freedom Caucus For The Failure Of “Flawed” Trumpcare Bill [VIDEO]

Sean Hannity tonight [last night] addressed President Trump‘s tweets slamming the House Freedom Caucus, saying that picking this fight is inadvisable at a time when GOP unity should be the primary concern. The president tweeted today, “The Freedom Caucus will hurt the entire Republican agenda if they don’t get on the team, & fast. We must fight them, & Dems, in 2018!”

Hannity argued the Freedom Caucus is not to blame here, saying that the bill was “flawed from the beginning.” He said while he doesn’t know who in the White House is pushing this line against the caucus, he feels it to be “misplaced” because they want a win on this too.

He concluded his monologue by saying that right now the focus needs to be on House leadership bringing together every single faction of the party in the name of unity and finding a consensus on repealing and replacing Obamacare.