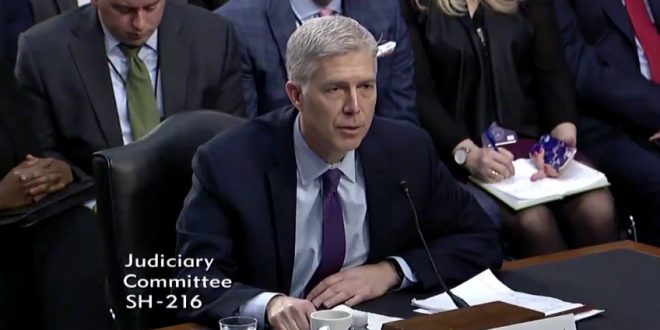 Gorsuch: If Trump Had Made Me Promise To Overturn Roe V Wade, I’d Have Walked Out The Door [VIDEO]

President Trump said during the campaign that he would nominate people to the Supreme Court who would overrule Roe v. Wade and return decisions on abortion rights to the states. Sen. Lindsey Graham (R-S.C.) asked Gorsuch if Trump had asked him during his interview before his nomination whether he would rule to overturn the 1973 decision.

“Senator, I would have walked out the door,” Gorsuch replied. It was at least the second time senators had pressed Gorsuch on what Trump said he would look for in a Supreme Court justice during the campaign. But Gorsuch said he does not believe in litmus tests and never was questioned about them.

“Senator, I would’ve walked out the door,” Gorsuch says when asked if Pres. Trump asked him to overrule Roe. v. Wade https://t.co/9cXeVrh2kY pic.twitter.com/K5iZfNJcr0