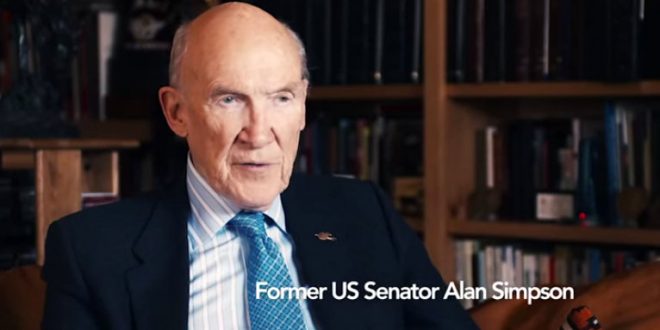 The New York Times today published an op-ed by former GOP Sen. Alan Simpson which urges Trump to ignore the demands of anti-LGBT groups that he issue a “religious liberty” executive order which would legalize anti-LGBT discrimination nationwide. It begins:

During Donald Trump’s campaign, he repeatedly cast himself as a supporter of L.G.B.T. rights. As president, however, he is being urged by fringe-right groups and raging extremists to sign a “religious liberty” executive order that would allow discrimination against gays, women and religious minorities. As one Republican to another, I’d like to offer this bit of advice to President Trump: Don’t do it.

I wish it were as simple as pointing out that supporting discrimination against anyone is just a bad idea and that doing so in the name of religion is hypocritical as well. But just for good measure, I’ll offer a few more reasons. The prospective executive order would authorize wide-ranging, taxpayer-funded discrimination against women, gays and members of minority faiths across federal programs and services. For example, a Social Security Administration employee could cite his religious beliefs to refuse benefits to the surviving spouse of a married same-sex couple.

The idea itself is extraordinarily unpopular. According to an August poll by the Public Religion Research Institute, 63 percent of Americans oppose these religious exemptions, and only 30 percent back them. The survey affirms what polling has found over the last several years: Americans are becoming more tolerant and inclusive, with support for equal rights continuing to grow. Sixty-two percent of Americans in the survey say they favor same-sex marriage, compared with 47 percent just five years ago.

But Mr. Trump, if you don’t trust the polls, then trust the people. When a White House draft of the executive order was leaked several weeks ago (yes, I know that’s painful), it unleashed a wave of negative news coverage and backlash from voters across the country. Most of them were plain dumbfounded, wondering why a president who just days before had crowned himself a steadfast supporter of the L.G.B.T. community would even consider signing an executive order that would license discrimination.

Simpson voted for DOMA in 1996 but later became an ardent advocate for the full spectrum of LGBT rights.

Previous Catholic League Endorses Trump’s Gutting Of The Arts Because “Perverts” Shouldn’t Get Federal Money
Next BREAKING: At Least A Dozen Injured After Shots Fired Outside Parliament, Policeman Stabbed Inside [VIDEO]