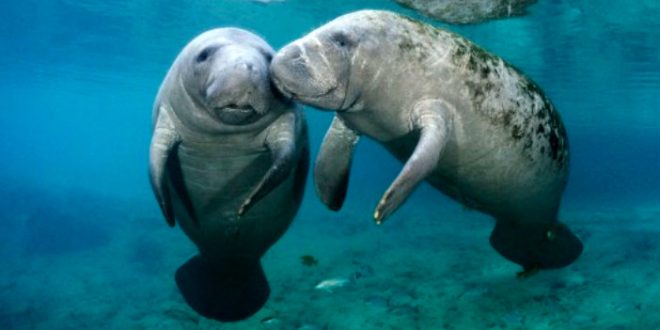 The manatee — for decades the poster mammal of environmental decline in Florida — is officially no longer an endangered species. The U.S. Fish and Wildlife Service announced on Thursday that the manatee will instead be designated “threatened” — a status change that reflects a boom in population over the last decade. In February, Florida wildlife managers released preliminary results of an annual count that recorded 6,620 manatees lumbering in the warm waters of Florida’s lagoons, springs and canals.

It was the third straight year the estimated population increased — a trend that federal wildlife managers point to as a sign of successful recovery for species that once numbered in the hundreds in Florida waters. But environmental groups argue the rebound comes along with a growing number of manatee deaths, particularly from boat strikes, and that the manatee’s fate remains uncertain. There is, for instance, a growing trend by manatees to huddle in cooler winters waters in artificial habitats created by power plants. If those shut down, there could be major losses.

From the US Department of the Interior:

Although the downlisting represents a milestone for the manatee, the agency underscored that important challenges still remain to ensuring the species’ long-term future throughout its range. As such, FWS biologists emphasized that the downlisting will not diminish any existing federal protections that will continue to play a vital role in the recovery of the species. The manatee will also continue to be protected under the Marine Mammal Protection Act.

“While there is still more work to be done to fully recover manatee populations, particularly in the Caribbean, manatee numbers are increasing and we are actively working with partners to address threats,” said Jim Kurth, the U.S. Fish and Wildlife Service’s acting director. “Today we both recognize the significant progress we have made in conserving manatee populations while reaffirming our commitment to continuing this species’ recovery and success throughout its range.”

Previous Fox Anchor Shep Smith Rips Into Rep. Devin Nunes For Colluding With White House: Is He A Shill? [VIDEO]
Next BREAKING: Michael Flynn Asks For Immunity From Prosecution In Return For Testimony On Trump/Russia