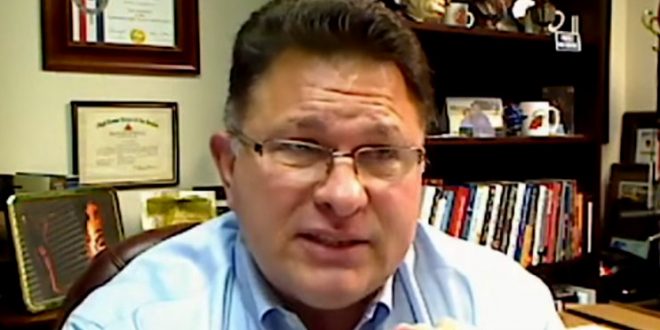 Some of you might recall the time this guy declared that stopping gay marriage was worth dying for. Well, gay marriage wasn’t stopped and he’s not dead – but his evil continues:

House Speaker Richard Corcoran defended his appointment of conservative activist John Stemberger to the Constitution Revision Commission, the panel that reviews and suggests changes to the state’s governing document. Stemberger, the Speaker explained, was a “diversity” pick.

Corcoran took questions from reporters Friday after the House floor session. Stemberger, who leads the conservative Florida Family Policy Council, has opposed same-sex marriage, adoptions by gays and letting gay youth in the Boy Scouts. Critics have questioned the pick, suggesting it was a sop to the Republican Party’s hard right-wing in case Corcoran decides to run for governor in 2018.

The Florida Family Policy Council is affiliated with the Liberty Counsel and every year they fly banner planes over Disney World warning Christians that filthy homosexuals are inside the parks to enjoy Gay Days. They also filed multiple lawsuits in failed attempts to stop public officials from issuing same-sex marriage licenses. Corcoran, not incidentally, is a graduate of Pat Robertson’s Regent University.

Equality Florida, a statewide organization dedicated to equal rights for the LGBT community is disappointed in the appointment of social conservative Leader, John Stemberger, to the Constitutional Revision Commission. The CRC meets every 20 years for the purpose of reviewing the state constitution and proposing changes for voter consideration.

Stemberger is the head of the Florida Family Policy Council and it’s political arm, Florida Family Action, one of the last notable groups in the states promoting socially conservative issues including opposition of same-sex marriage and pro-life views.

“We are extremely disappointed to find out that Speaker Richard Corcoran has appointed extremist John Stemberger – someone who slanders LGBTQ people and attacks us and our families – to the Florida Constitution Revision Commission.” said a statement from the organization.

Previous Todd Starnes: The “Bat-Crap Crazy Feminist” Who Accosted Sean Spicer Needs To Learn Manners
Next Sean Spicer Says “Sure” When Asked To Concede That Trumpcare Will Cost Millions Their Coverage [VIDEO]