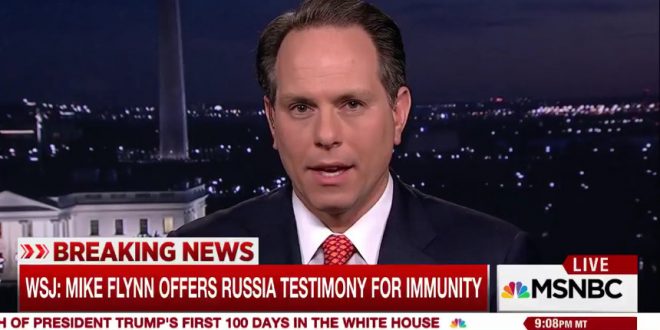 Ex-CIA Chief Of Staff: The Only Person Michael Flynn Could Give Up To Get Immunity Is Trump [VIDEO]

A former top government official said the White House reminds him of a “runaway train” following the latest revelations Thursday about President Donald Trump’s ex-national security adviser. Mike Flynn, who served as the president’s national security adviser for three weeks, says he is willing to be interviewed about the Trump campaign’s possible ties to Russia in return for immunity from prosecution.

“The image I have in my head of the White House is a runaway train,” Jeremy Bash, chief of staff at the CIA and then the Department of Defense under former President Barack Obama, said on MSNBC late Thursday. “The brakes are out … that is how much trouble we’re in.”

“And for the Justice Department to agree to give somebody like him immunity it means they want him to turn and testify against someone higher up in the food chain,” Bash said. “Who is higher up in the food chain, higher than the national security adviser? There’s really only one person. And so this shows that the jeopardy of criminal liability actually extends all the way to the top.”