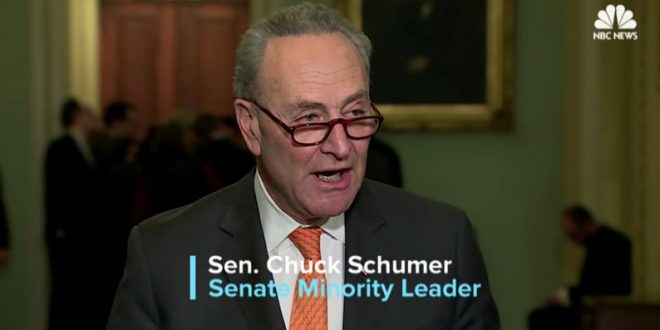 Trumpcare doesn’t replace the Affordable Care Act, it forces millions of Americans to pay more for less care. This plan would cut and cap Medicaid, defund Planned Parenthood, and force Americans, particularly older Americans, to pay more out of pocket for their medical care all so insurance companies can pad their bottom line. It cuts taxes on the rich to make middle class families pay more.

To make matters worse, this sham of a replacement would rip treatment away from hundreds of thousands of Americans dealing with opioid addiction, breaking the President’s word that he would expand treatment, not cut it. This bill is a giveaway to the wealthy and insurance companies at the expense of American families, and Senate Democrats will work hard to see that it is defeated.

Tonight, Republicans revealed a Make America Sick Again bill that hands billionaires a massive new tax break while shifting huge costs and burdens onto working families across America. Republicans will force tens of millions of families to pay more for worse coverage — and push millions of Americans off of health coverage entirely.

Under the Republican bill, older Americans will be exposed to soaring new costs, and millions of families will lose their health coverage. The GOP bill shortens the life of the Medicare Trust Fund and pushes millions of seniors and disabled Americans who depend on Medicaid coverage into the cold. Republicans even enable insurers to once again charge more or deny coverage to millions of Americans with pre-existing conditions, abandoning those families who lapse in coverage for any reason at all.

This Republican bill will do massive damage to millions of families across the nation. Republicans have decided that affordable health care should be the privilege of the wealthy, not the right of every family in America. Without a CBO score to reveal the catastrophic consequences of their Make America Sick Again bill, Republicans must not move forward with a committee vote. The American people deserve to see what Republicans are trying to do to their health care.