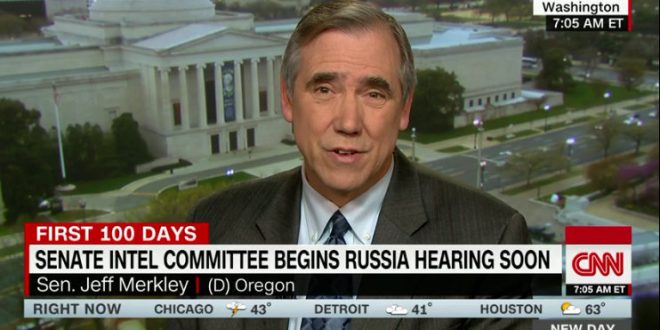 Dem Senator: The Credibility Of The US House Probe Into Russia’s Election Meddling “Is In Shreds” [VIDEO]

House Intelligence Committee Chairman Devin Nunes’s (R-Calif.) actions have damaged the integrity of his panel’s investigation into Russian election interference, Sen. Jeff Merkley (D-Ore.) says. “I think there has been so much tactics and strategy by the House chairman to support the president that the credibility of the House really is in shreds,” Merkley said Thursday on CNN’s “New Day.”

Asked if he’s “given up” on the House committee’s investigation, Merkley said, “pretty much,” adding: “I think anywhere the House gets to, the Senate will have gotten to previously.” Nunes revealed last week that he has seen evidence the U.S. intelligence community incidentally surveilled President Trump’s transition team before inauguration. Nunes met with an unidentified source on White House grounds the day before his announcement to view evidence of the surveillance. He has refused to share the proof with members of his committee.

.@SenJeffMerkley: I’ve given up on House probe into alleged Trump/ Russia ties: Their “credibility … is in shreds” https://t.co/9qDhXSsjzT

Previous Federal Court Extends Block On Travel Ban Indefinitely
Next Vladimir Putin To CNBC: Claims That Russia Meddled In US Elections Are Political “Lies And Provocations”