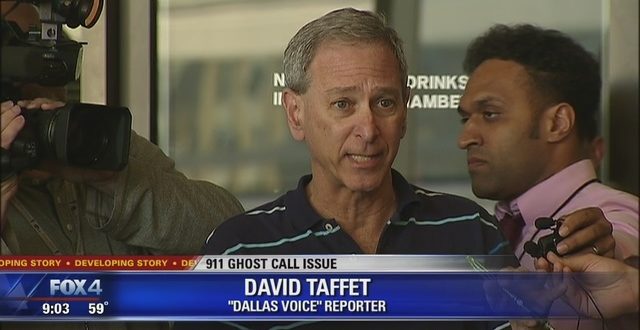 David Taffet came home last week to find his husband, Brian Cross, a little disoriented. Cross hadn’t eaten yet, so Taffet made him some dinner. But after he ate, Cross lay down, went to sleep and started snoring. Then Cross suddenly stopped snoring. The 52-year-old, whom Taffet met at a protest against the Defense of Marriage Act seven years ago, always snored. Taffet called 911 and was disconnected. He called back and was put on hold.

“I was frantic, just frantic trying to get through,” Taffet said. “I was pounding on his chest, screaming on the phone. There was nothing I could do.” Taffet said it took 20 minutes to get through to a call taker. Once he got through, Dallas Fire-Rescue paramedics arrived in no time. They took Cross to a hospital, but within about an hour, doctors told Taffet that his husband was dead.

The death is the second to be seemingly tied to what has been dubbed a “ghost call” issue in which T-Mobile customers’ phones flood the city’s 911 call center with phony emergency calls, forcing legitimate emergency callers to wait in line. It’s unclear whether a quicker response would’ve made any difference for Cross, and Taffet isn’t yet sure what caused his husband’s death on March 6. But on Wednesday, Taffet showed up to Dallas City Hall and demanded answers, both as a grieving widower and as a reporter for the Dallas Voice.

On Wednesday engineers and executives from T-Mobile rushed to Dallas after a local television station reported that a 6-month-old boy had died while his babysitter was kept on hold by 911 for 30 minutes. According to the above-linked report, Dallas city officials have known about the 911 problem for months. (Tipped by JMG reader Alan)

UPDATE: The Dallas Morning News has posted a follow-up.

T-Mobile engineers and city officials said Thursday they’ve made “significant progress” in figuring out why the Dallas 911 call center has been so bogged down by spurious calls. City spokeswoman Sana Syed said a series of complex technological issues have helped create a debacle that has correlated with at least two deaths. What remains unclear is who shares in the blame and whether the problem is fixed.

T-Mobile has made some technological upgrades, which officials declined to elaborate on for security reasons. And city officials say they plan to make their own changes. The city will also add a dozen call takers a day until the issues are resolved. The days ahead will be critical, Syed said. T-Mobile now believes it wasn’t alone in the problem. Company officials claim their large market share in Dallas made it appear that T-Mobile was the lone troublemaker when they were not.