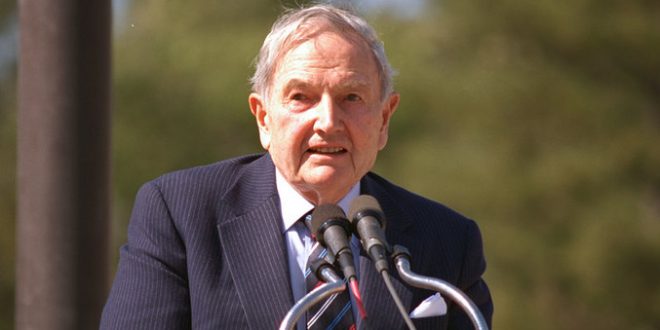 He was named president and co-CEO on Jan. 1, 1961, eventually becoming sole CEO and chairman from 1969 through 1980. He relinquished the chairmanship in 1981, when he retired. The bank later became JPMorgan Chase, one of the world’s largest financial institutions.

Rockefeller is credited with giving away some $2 billion to various causes, including biomedical research, the arts and New York City’s urban revitalization efforts. He signed the Giving Pledge, pledging to donate at least half of his fortune during his life or in his will. He was a longtime member of the Council on Foreign Relations, serving as chairman from 1970 to 1985.

Judging by posts made today to conspiracy, alt-right, and Nazi sites, Rockefeller was only second to George Soros as the grand globalist boogeyman totally behind the Illuminati, the New World Order, and a hundred other double-secret organizations designed to destroy America. Oh, and he’s not really dead, he’s just shape-shifted back to his natural reptilian form. The YouTube clips below tell their story just from their splash screens.