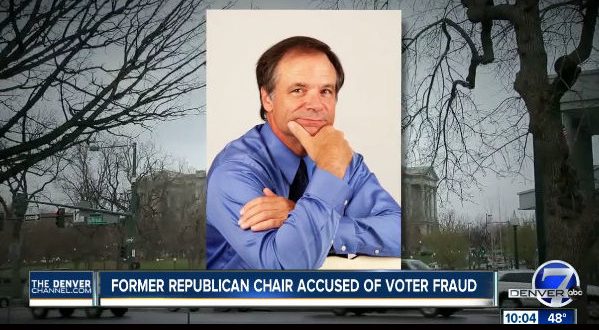 The former chairman of the Colorado Republican Party is charged with forgery and voter fraud for allegedly forging his wife’s mail-in ballot from last year’s election, according to court records and sources. Steven Curtis was the chairman of the state party from 1997 to 1999. He was charged Feb. 1 with one count of forgery of a public record, a fifth-degree felony, and an elections mail-in ballot offense, a misdemeanor.

The criminal complaint for his arrest says that Curtis tampered with a 2016 General Election mail-in ballot. Sources tell Denver7 that he signed the ballot, which was his wife’s, with her name, which led to the forgery charge. The misdemeanor charge stems from him allegedly filling out her ballot. If convicted, Curtis faces a maximum of between 1 and 3 years’ incarceration for the forgery charge and up to 18 months and a $5,000 fine on the misdemeanor charge.

Watch the video to hear this tool rant about voter fraud by Democrats.

Previous CALIFORNIA: Apparel Company Hits Ivanka Trump With Class Action Lawsuit For “Unfair Competition”
Next GERMANY: Gay Men Convicted Under Nazi-Era Law To Be Given Compensation And Have Records Expunged