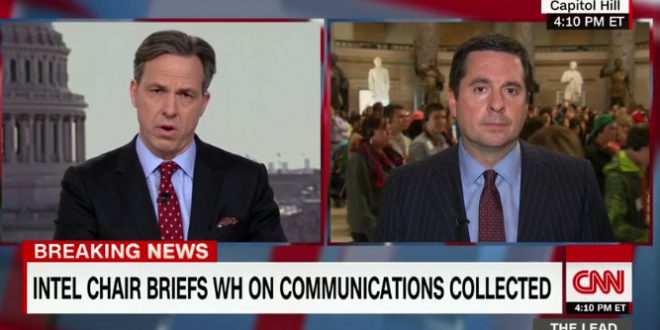 CNN’s Jake Tapper on Wednesday hammered Republican House Intelligence Chairman Devin Nunes over his assertion there may have been “incidental collection” of President Donald Trump during the transition. “You said he could have been, but I don’t know what that means,” Tapper began in a lengthy and contentious interview, pointing out that the incidental collection of communications between Trump associates and Russian officials “doesn’t mean that Obama wiretapped Trump Tower.”

Nunes contended that there was “unmasking” of Trump officials during the transition—meaning the naming of American citizens in intelligence reports (as opposed to denoting “American A” or some other designation) which concerned him. “Just to be clear, there’s still no evidence that President Trump was wiretapped,” Tapper noted. Nunes agreed with Tapper, but remained concerned about the “unmasking” of U.S. citizens, arguing there “doesn’t appear to be a reason” for the unmasking.

Tapper pressed Nunes about why he approached Trump with this information first, asking if it was fair for Democrats to “look at you going to the White House and delivering this information to President Trump” and question his “impartiality.” “It’s not fair for him not to know what’s in these reports,” Nunes replied.