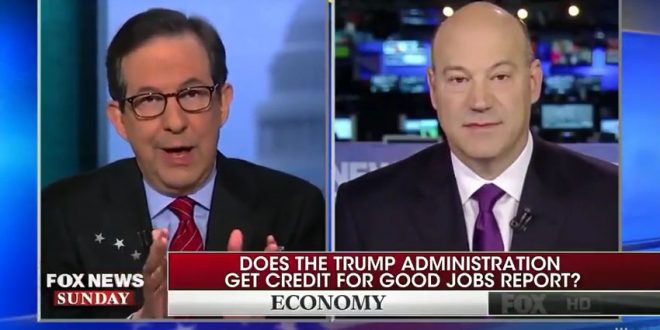 Chris Wallace To Trump Advisor: Why Should We Believe Jobs Numbers Trump Once Called “Phony”? [VIDEO]

On Fox News Sunday today, Chris Wallace asked White House Chief Economic Advisor Gary Cohn about President Trump‘s past dismissals of jobs numbers. The White House touted the numbers out this past Friday, but as Wallace pointed out, during the campaign Trump called similar reports “phony.”

Sean Spicer quoted Trump as explaining, “They may have been phony in the past, but they are very real now.” Wallace played video of Trump dismissing the “phony” numbers and asked Cohn, “If that’s true, why should we believe these numbers? And the fact is, did you inherit an economy that has been for the last 18 months somewhere between 4.6 and 5 percent unemployment?”