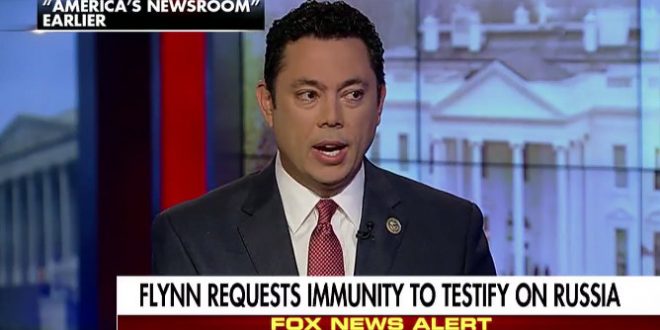 Jason Chaffetz: Congress Should Not Give Immunity To Flynn And Trump Should Shut Up About It [VIDEO]

President Donald Trump shouldn’t talk about whether former national security adviser Michael Flynn should be granted immunity, a top House Republican advised Friday. House Oversight and Government Reform Committee Chairman Jason Chaffetz (R-Utah) told Fox News he disagrees with the president’s characterization of the Russia investigation, as well as the commander in chief’s decision to comment on it.

“No, I don’t think it’s a witch hunt,” Chaffetz said. “Look, it’s very mysterious to me, though, why all of a sudden General Flynn is suddenly out there saying he wants immunity. A, I don’t think Congress should give him immunity. If there’s an open investigation by the FBI, that should not happen. I also don’t believe that actually that the president should be weighing in on this. They’re the ones that actually would prosecute something.”

Previous Bookmakers Up Impeachment Odds To 56%
Next GOP US House Rep On Food Stamps: The Bible Says If You’re Unemployed, You Don’t Get To Eat [VIDEO]