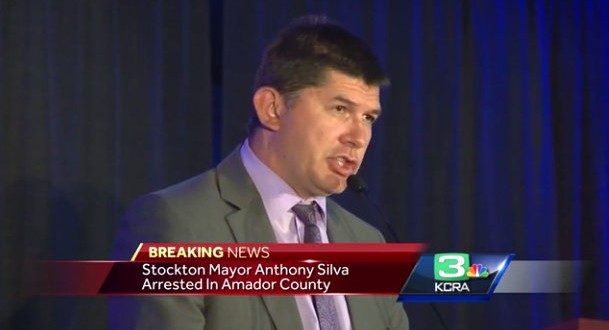 Last year GOP now-former Stockton Mayor Anthony Silva, who held official town hall meetings at an anti-gay megachurch and who ceremoniously gave the key to the city to God (who did not attend), was arrested on multiple charges including secretly recording a male teenager playing a game of strip poker in his bedroom at a summer camp. Silva beat those charges, but today there’s this from the Sacramento Bee:

Silva was transported to San Joaquin County jail in French Camp and is facing a number of felony charges, including embezzlement by a public official and money laundering, said Tim Daly, spokesman for the San Joaquin District Attorney’s Office.

Daly said Silva, 42, could be arraigned as early as Monday or Tuesday and the requested bail amount is $1 million. The DA’s Office would have further comments later on, Daly said.

The San Joaquin County DA’s Office on Thursday issued an arrest warrant for Silva alleging misappropriation of public funds, grand theft, embezzlement and other charges. All come with a white-collar crime enhancement imposed when a “pattern of related felony conduct” results in the theft of more than $100,000.

Read much more about Silva’s scandalous past at my initial report from last year. (Tipped by JMG reader Lane)