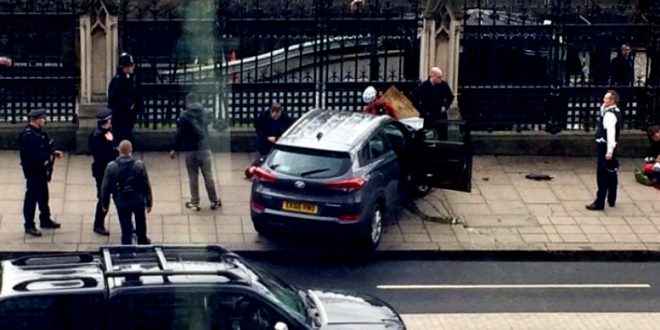 BREAKING: At Least A Dozen Injured After Shots Fired Outside Parliament, Policeman Stabbed Inside [VIDEO]

Shots are reported to have been fired close to the Houses of Parliament in central London. Politicians and journalists have tweeted about hearing loud crashes outside the buildings. Witnesses said they saw people being treated for wounds and reported seeing a man with a knife in the grounds.

Staff inside Parliament were told to stay inside their offices. The BBC’s Laura Kuenssberg said police told her someone had been shot. She said MPs had told her they heard “three or four gunshots”. Tom Peck, political editor for the Independent, tweeted: “There was a loud bang. Screams. Commotion. Then the sound of gunshots. Armed police everywhere.”

Prime Minister Theresa May has reportedly been evacuated from the area. Story developing…

MORE: Policeman stabbed inside parliament – leader of House of Commons

There was an “almighty crash” as a vehicle hit the railings outside Parliament, a witness tells Sky News pic.twitter.com/ubgSsntZPm