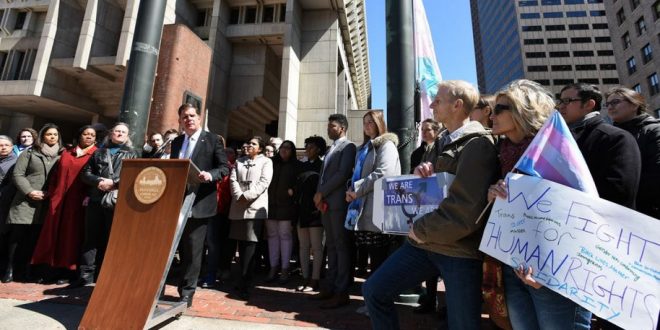 Boston is responding to the arrival of the anti-transgender “Free Speech Bus” by raising a transgender flag at City Hall in an act of solidarity. Mayor Marty Walsh had the flag raised around 1 p.m. after saying “we are always going to support our transgender community and defend their fundamental rights.”

The “Free Speech Bus” rolled into town earlier in the morning. The bus has made its way through several states spreading its message of, well, pretty much what it says on the side of the bus: “It’s biology: Boys are boys…and always will be. Girls are girls…and always will be. You can’t change sex. Respect all.”

There was a small group of protestors that greeted the bus as it arrived at the State House this morning, The Boston Globe reports. “We will not be intimated by discrimination or harassment,” Baker said in front of City Hall.

Boston is, and will remain, an accepting and inclusive City. I’m proud to raise the transgender flag at Boston City Hall today. pic.twitter.com/T3Fqxnm4w2

Mason Dunn of the MTPC with @marty_walsh after the flag raising. pic.twitter.com/l5XSt6WmzY

Hey, it's the Cavalcade of Tragic People With Too Much Free Time at Cambridge Common! We're protesting #freespeechbus pic.twitter.com/0uDJYLuCaq

In which the Free Speech Bus blocks traffic. Someone dub this over with "Band on the Run."' pic.twitter.com/FvQjEP1lpP