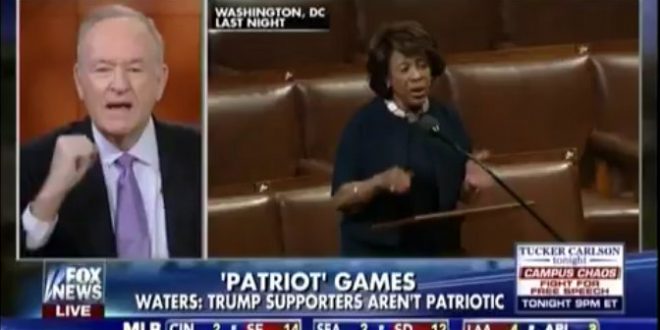 Media Matters has the transcript of Bill O’Reilly’s racist assholery on Fox & Friends this morning:

BILL O’REILLY: I didn’t hear a word [Rep. Maxine Waters (D-CA)] said. I was looking at the James Brown wig. If we have a picture of James, it’s the same wig.

BRIAN KILMEADE (CO-HOST): And he’s not using it anymore. They just — they finally buried him.

EARHARDT: Her hair is pretty.

O’REILLY: I love James Brown, but it’s the same hair, James Brown — alright, the godfather of soul — had.

EARHARDT: So he had girl hair.

O’REILLY: Whatever it is, I just couldn’t get by it.

African-American woman in Congress speaks up against the president, Bill O’Reilly says he won’t listen because of her hair. pic.twitter.com/GVOkZNBNX9