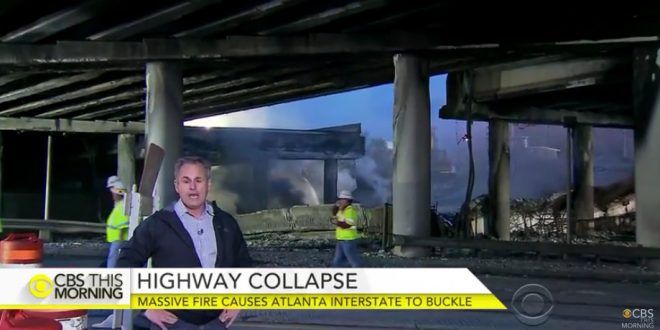 A massive fire caused a bridge to collapse Thursday night on Interstate 85 in Atlanta, one of the busiest stretches of roadway in America, backing up rush hour traffic for several miles and creating what the mayor called a long-term “transportation crisis.” The huge fire was reported at 6:21 p.m. ET underneath the bridge on the northbound side — near where the interstate merges with another major artery, State Highway 400 — forcing authorities to close the interstate and turn drivers around during the evening rush.

Then, at about 7 p.m., the bridge collapsed in a flaming heap that spewed thick, black smoke high into the air, where it was visible for miles around Atlanta. Authorities managed to turn back traffic before the bridge collapsed, and Georgia Gov. Nathan Deal said no injuries were reported. But thousands of motorists were locked in place on the interstate as state troopers worked on a way to get vehicles off the roadway.

Atlanta officials are reporting a “historically bad” commute this morning.