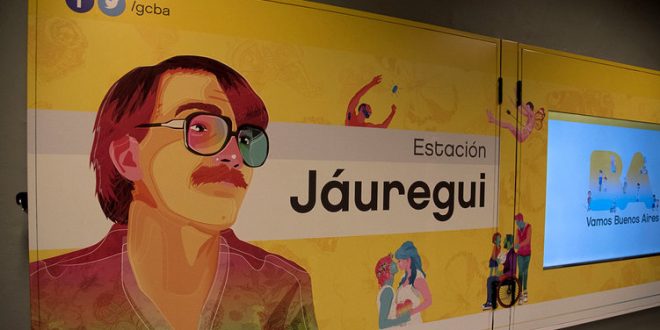 Today marked the opening of the newly inaugurated Carlos Jaúregui subway station. Located on the corner of Avenida Santa Fe and Pueyrredón, the stop was previously referred to as the “Santa Fe” stop on the H line.

The opening represents a landmark step forward for the LGBT community in Argentina, and worldwide, as it is the first station in the world to be named after an LGBTQ activist or AIDS advocate. Carlos Jáuregui was an outspoken defender of human and LGBT rights and was the first president of the Argentine Homosexual Community (CHA).

Via press release from the city’s official tourism bureau:

The Undersecretariat for Human Rights and Cultural Pluralism, in conjunction with Buenos Aires and Subterranean lawmakers from the Buenos Aires State Society (SBASE), oversaw this intervention on line H, which will also become an LGBT point of interest.

Artist Daniel Arzola was responsible for the mural and the works that surround the Carlos Jáuregui station. The mural was designed with great dimensions, composed of different characters representing the LGBT rights and achievements, diversity, and integration. On the stairs, you will find the pride flag artistically intervened and the balconies to the platform display portraits representing equality.

The Carlos Jáuregui station aims to be a space to recognize the LGBT community and to celebrate inclusion, coexistence, and non-discrimination through an artistic, informative, and educational manner to all visitors to Buenos Aires.