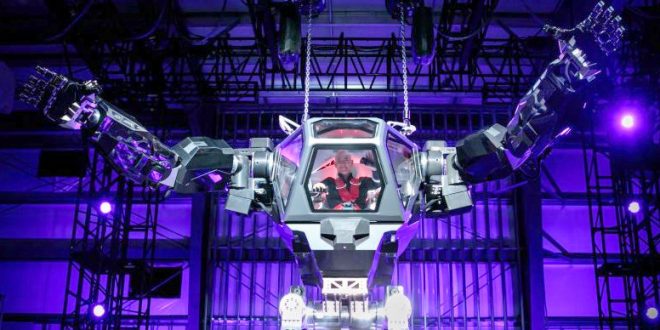 Get away from her, Amazon! Via Gizmodo:

What would you do if you were a billionaire? Elon Musk is trying to get to Mars. Peter Thiel wants to live forever. And Jeff Bezos, well, Amazon CEO Jeff Bezos apparently wants to rule the world in a gigantic robot. At least that’s the impression you might get from the photos and video taken yesterday.

Last night at Amazon’s annual robotics conference Jeff Bezos slipped into something a bit more comfortable—a 13-foot tall robot designed by Korean company Hankook Mirae Technology. Bezos, much like his fellow tech billionaires, seems to be on the fast track to supervillain status before we’re all inevitably annihilated in a nuclear war started by one of Trump’s butt-tweets.

And you thought delivery by drones was a dumb idea.

Previous Wolf Blizter On Today’s Implosion Of Trump’s Lies: What An Embarrassment For His Administration [VIDEO]
Next HHS Strips LGBT Seniors From Annual Survey