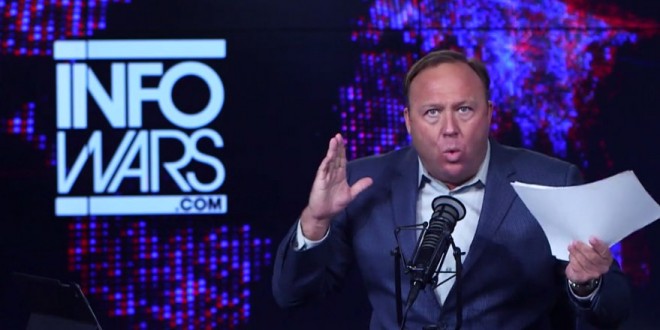 Conspiracy theorist and radio host Alex Jones was pressured to air an apology for his role in spreading the false “Pizzagate” conspiracy theory, which led to a Jones listener firing a gun inside a Washington, D.C. pizzeria. Jones aired a pre-taped video in which he acknowledged that he made commentary about the pizzeria owner that “in hindsight I regret and for which I apologize to him.”

On December 4, Edgar Maddison Welch entered Comet Ping Pong during business hours while wielding an assault weapon to “self-investigate” the false conspiracy theory that the restaurant was helping the campaign of Hillary Clinton traffic children. After patrons and employees fled, Welch fired several shots. On March 24, The Washington Post reported that Welch had pleaded guilty to two violations of federal and local gun laws.

As you’ll see below, Jones is very likely attempting to fend off a lawsuit from the owners of Comet Ping Pong. His “apology” includes the casting of blame on other outlets for promulgating his insane story.